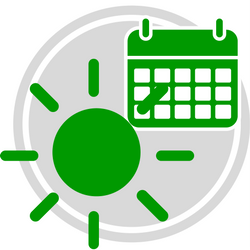 Whatever has happened in the past, it is the present that you need to change. Focus on where you are now, and what you want to deal with.

Start a business or a career, improve relationships, find your purpose. Wherever you are now, anything is possible.

Note: This article was originally published in ‘Haywards Heath Matters’ in March 2013
Spring is here.  The weather is improving and there are daffodils, crocusses and primroses on the verges.  Now is the time when many people feel the urge to have a good clean-up of the house and the garden.  A real spring clean.
Whether or not that is true for you, the lighter evenings and the prospect of warmer weather can be quite motivating and sometimes it’s not just our physical surroundings that need a good de-clutter. Why not take the opportunity to have a look at making your life easier, tidier and more peaceful. Just putting pen to paper and making a few lists can be a good way to start.  So find yourself somewhere pleasant to sit, get a pen and a nice notebook and off you go! END_OF_DOCUMENT_TOKEN_TO_BE_REPLACED

I finally GET getting there

When you go on holiday do you enjoy the journey itself? Do you just want to get to that destination as quickly as you can and make the most of your holiday? Or do you enjoy all the experiences and changes along the way?

I think I’m in the second group for the most part. As a child, my favourite bit of the journey was the train. All our holidays were in this country and we mostly took the train. I remember the thrill of the waiting on the platform and the obligatory visit to the gents which I mostly did just because I wanted to know what they were like! (Sorry Dad). END_OF_DOCUMENT_TOKEN_TO_BE_REPLACED

It’s become a bit of a habit to pop out on a Saturday morning for a cup of coffee, and sometimes that also means I have a moment to write my blog.
This morning is a particularly inspiring one because the sun is shining brilliantly. It’s cool but definitely going to warm up in time for Kelly’s wedding. My friend Kelly is getting married to the love of her life, Dan, today. It sounds like a wonderful affair, set in Brighton, with a bus for the guests and a whole lot of fun to be had.
On Thursday, I sent her my best wishes and promised her that we would have sun for the day, and I was right. I didn’t doubt it for a minute. I have always had direct control over the weather – (yes folks, it’s my fault).
The thing is, so does everybody. END_OF_DOCUMENT_TOKEN_TO_BE_REPLACED

A lot has been written and said about the Facebook phenomenon. Love it or hate it, it’s here for a while yet, and the concept that it has created in society will last even longer.
Whether you are a fan, a casual user or one of the many who reject Facebook for various reasons it is still unavoidable. Every website has a ‘like’ button (test mine out!) Every company has a page, or an ad or a marketing strategy that takes advantage of the power of the social network.
Personally, I think Facebook is like any other tool. It will be what you make it. It can be a power for good or a power for ill. It can be fun and frivolous or it can be disturbing and depressing.
The main thing is to use it right, or not use it at all. So with that in mind I thought I would deliver my own personal top 7 tips for making the most of Facebook. These are ideas that are more or less built on my model of the world, and I know that yours may be distinctly different, but bear with me and maybe some of what I suggest may ring true. END_OF_DOCUMENT_TOKEN_TO_BE_REPLACED

Anybody feel a metaphor coming on? END_OF_DOCUMENT_TOKEN_TO_BE_REPLACED

Tell me what you want, what you really really want

As part of the process of performing NLP, Hypnotherapy, and indeed any kind of treatment, there is one very important check that always takes place. It’s the ecology check.

Clients can come to a therapist for an incredible range of issues. In fact I would say that every client has a unique situation, that is supported by his or her own personal history. So a good therapist will always seek some further information before performing an ‘intervention’, rather than assume that one technique will always work.

For example a client may come to a therapist with a fear of dogs, and there are several excellent and powerful techniques for dealing with such phobias which are fairly general. However the therapist will want to be sure that the phobia is not in fact an ‘example’ of something else. Removing a phobia without some deeper understanding of the issues may result in a less successful outcome, or it may be successful but leave the client with the bigger issue unresolved, which may mean he or she will develop new ‘symptoms’. END_OF_DOCUMENT_TOKEN_TO_BE_REPLACED

It’s all about attitude

For most of us, success in life is elusive.
In the busy day-to-day battle between chaos and the mundane, it is difficult to spend more than a few moments sometimes dreaming of what success would look like.
But that’s exactly what we need to do.
Every day.
Our dreams are where we start from in life, and if we continue to dream, they are also where we end up. As the song goes, ‘don’t dream it, be it’.
Different people have very different ideas about what they want to be, to have and to do. For some, success is about big money, fast cars and a beautiful home. For others it may be less concrete – a contented life, happiness, peace. We are our own judges on such things. END_OF_DOCUMENT_TOKEN_TO_BE_REPLACED