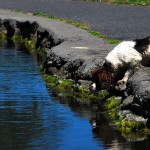 The Spaniel is a bundle of energy and enthusiasm. He is panting excitedly, whirling around my neighbour’s legs as she untangles his lead and gets herself organised for the woodland walk. He is shuddering with anticipation, straining at the leash and raring to go.

Meanwhile the graceful deer-hound is trying very hard to be forgotten. She looks thoroughly miserable in the driving rain, her long shaggy coat seems already to be dripping, her head is bowed. Her tail is between her legs.

It got me to thinking about the age old question of optimism versus pessimism.  I have long been an optimist at heart. It’s not the sunny kind of optimism where no matter what happens I look on the bright side.  I’m not that man falling out of a tall building who shouts ‘doing alright so far!’ as he passes each window on the way down.  Rather I tend to favour the most optimistic outcome that is reasonable in any set of circumstances.  Does it stop me worrying? Sometimes… not always,  but it can often help to keep things in proportion. It enables me to be a Spaniel and dance in the rain occasionally.

I have many friends who have the opposite point of view.  They say, “Don’t expect too much out of life and you won’t be disappointed.”  They believe in avoiding risk and being ‘realistic’.  Which in it’s place sounds a very good principle – until you realise that ‘realistic’ itself can be unrealistic.

What makes people think that it is realistic to be negative? If you think realistically’ you’re never going to get a better job, then you probably won’t ever apply for one. The belief is enough to ensure the outcome. But I know plenty of people who have had a lucky break just because they stuck their necks out and tried anyway.  It can be quite difficult to be ‘unlucky’ all your life I think.  It’s realistic to think that most of us  will have things in our lives we are really grateful for – maybe our partner, our kids, the place we live or our job.  It’s unrealistic to think that absolutely nothing goes right,

Interestingly, by the time the dogs returned things had levelled out a bit.  The Spaniel still looked full of enthusiasm – I don’t think they know anything else, but the Deer-hound had perked up considerably too and I don’t think it was just because it was approaching home. I think it had forgotten its initial judgement and discovered that a walk in the rain with all those fascinating smells an the society of other dogs, wasn’t such a bad thing after all.

Which of these do you think you are?  Or are you an entirely different breed?